I recently read a short essay that described prayer as something that should best be studied by the physical sciences.  This claim has been made for quite a long time, and I think there may be some truth to it.


I wonder, though, if the people who make this kind of claim are trying to understand prayer as a kind of incantation.  That is, it seems like they are saying that the best way to examine prayer is to study its effectiveness, by which they mean that some people should ask God for something and then we will measure the frequency with which those prayers are "answered."

Now, I'm no expert on prayer.  And I know that any discussion of prayer is going to get sticky.  But I think this kind of effectiveness study is misguided.  I don't think we should think of prayer as words we say in order to make God do things that God would not otherwise do.  If it were, that would make prayer into a kind of magic, or it would turn God into a kind of technology, or both. 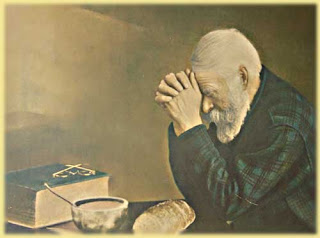 When I read the prayers in the Anglican Book of Common Prayer, or when I listen to or read others' prayers, I see something else: the people who pray seem to have the expectation that God will do what God will do, not what they want God to do.  In a way, this makes sense: if God is personal, then God is not to be dominated or pushed around any more than we are.  It seems like most of the prayers I've read sound like requests and arguments and complaints and even like words spoken in love.  Even when (as in the Book of Job) people chastise God for seeming not to act, or when they rebuke or forgive God for not having acted, there seems to be a sense that God is a person, not a tool.

I think that if we were to look to some of the great works of prayer - the works of the mystics in any tradition, for instance - or even if we were to ask ordinary people why they pray, we would find that their concern is not with whether prayer makes miracles happen but with the way in which prayer manifests and nurtures their relationship with the divine.  I don't really know how to judge that sort of claim, and I often just listen to it in wonder.  But I'm pretty sure that if we were to attempt to measure the "effectiveness" of that prayer, we would wind up ignoring or doing violence to the claim that what matters most in prayer is the conversation and the relationship.
Posted by David O'Hara at 8:18 AM 1 comment: