I Want My Religion To Be A Garden

Today my ecology advisee and I met while walking across our campus. Walking and talking, we ignored the formalities of her writing, and attended to the plants and animals around us. Soon we will need to return to the texts: to her reading and writing. But today we did that by attending to the garden around us. 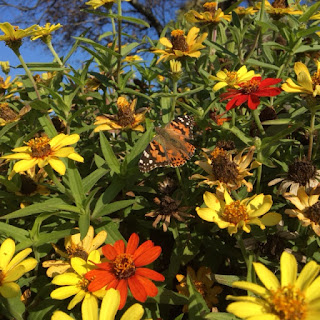 I’ve entered a stage of my life where I am less concerned with the proofs and proof-texts of religion and more interested in the practices that I've inherited. Like William James, I’m more curious about the fruits than the roots. I want my religion to be like a garden. I hope it has good soil, but I’m likely to judge its health by what it produces.

Maybe this is why liturgy has come to be meaningful for me, just as poetry has. I know I won’t be able to command words forever, so I want to store up good words while I can. I’ve seen my elders lose their words as their minds age. I’ve also seen them retain their songs. Ten years after his stroke, as he was approaching the end of his life, Granddad couldn’t understand my questions, couldn’t remember my name, couldn’t say much about what he needed. But sometimes a spark of life would come to his eyes, and he would begin to sing. It was almost always a song he had learned eighty years before, when he and the twentieth century were both still young.

And there is deep wisdom in the return to ancient songs, and to ancient texts. Don’t return because you must but because you can.  Don't return to slavishly obey them. Return as heirs who hold up inherited keepsakes to the light and consider the relics of our ancestors. What made them hold on to this, to save this for us, to pass this on to us? What role did it play in their lives?

Some of the relics seem silly at first, but they are often palimpsests of signs, layered meaning upon meaning. The Ark is a nice children’s story – as long as you leave all the death and violence out of it – but it’s also silly. Who believes you could make such a boat of gopher wood, and carry in it so many species?

But then I reflect a little longer and I think: it may be silly, but it is also a story of what we do, and of what we must do. We bring floods upon ourselves, and we fail to plan for them, and we mock those who do. I no longer reject the story of the Ark as unhistorical; now I think: we need more Arks, for the sake of the future.  That is, I'm not as concerned with the roots of the story as with the fruit such a story might bear when I hold it up to the light. We need Svalbard seed banks all over the world. We need to make Arks of our gardens, we need buffer strips around our waterways so that we can make Arks of our oceans. We need national parks as Arks of refuge from our constant expansion. The world is not limitless, but we spend it like teenagers spending their first paycheck on a wild weekend, full of expectation that there is so much more to come, so much time for saving later on.

Some of the relics we've inherited are not things but rituals. I’ve heard priests joke that their job is to “hatch, match, and dispatch”: to welcome new lives into a community, to bear witness to new commitments, to help the community say goodbye to those we have lost. They joke, but we know there’s not much that matters more than these acts of love.

The ritual of Communion has become meaningful to me for a similar reason: love. Where else can I go to sit as equals with people from across the community, to take bread and wine with them, regardless of race, class, gender, income, age, or language? All are welcome, I am told, and I have seen it happen, if only briefly, on Sunday mornings. I admit it: I’d rather sip coffee, alone, with a book and some good music in the background, preferably with a good view of mountains, or water, or both. But I commit myself to this ritual of sharing bread and wine with strangers because I recognize that what I want and what I need are not always the same thing.

We need hospitality towards the stranger, philoxenia as the Greek language calls it, friendship towards those who are not like us. We need to remember that for some people “good Samaritan” was an oxymoron, since Samaritans were another nation who didn’t act like us, and who therefore could not be good. Then we need to become that oxymoron, and show such goodness to others that we give them the delight of learning that people like us can love people like them.

We need to cultivate a sense of awe, and wonder, if only because awe and wonder remind us that we are not the end of the story, nor even its beginning. We are in the middle somewhere, which means we have received an inheritance, and now it is ours to safeguard and to pass on to others.

We need to avoid making idols not because the idols are wicked but because once we focus our worship on what we have made we become worse than we were. Idols induce myopia. The shiny stones narrow our gaze, their brilliance blinds us to darker and gentler colors.

Money can become an idol, and because it produces money, work can become one of those idols, too.  We need Sabbath-rest. We need it for ourselves and for our workers and for every field we till. We’ll be told we are fools for not maximizing our productivity, just as Noah was told he was a fool for focusing on the short-term need to build a lifeboat.

Noah lived to be nine hundred and fifty years old, we are told. Maybe the focus on productivity is an idol, too.

I want my religion to be a garden, a place where beautiful things can grow, things worth looking at for their own sake, as well as things that will nourish my family and my neighbors.  A place where I must return, day after day, to see how things are growing; to see what needs to be fertilized, what needs to be pruned, what weeds need to be pulled; to see what old plants still blossom, what new plants are springing up from seeds borne on the unseen wind.

My gratitude to Ed Mooney, who reposted this on his Thoreau blog, Mists On The Rivers; and to Lori Walsh of South Dakota Public Radio for asking me to read this post on Dakota Midday on November 3, 2016.  People like Walsh and Mooney make good gardening possible, and far more joyful.
Posted by David O'Hara at 10:47 AM No comments: