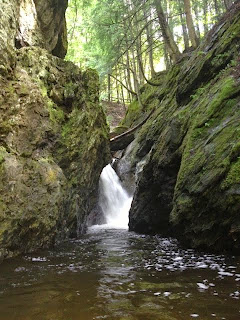 Matt and I stand thigh-deep in one of the small streams that tumble down the eastern slopes of the Green Mountains.  Many of those streams, including this one, have carved steep gorges over the millennia.  As the water falls it strips away the sand and loam, leaving a course choked with jumbled boulders.

Every year a few more trees, undercut by the current, tip over into the stream, where they lodge against the boulders and form temporary dams.  As the water flows over those dams it digs deep plunge pools, bubbling and swirling for a few feet, then quickly settling into swift, clear, tea-colored glassy pools.  The water slows only long enough to catch its breath before it plunges again, stair-stepping down the mountain, moving the mountain itself downstream one grain of sand at a time.

Beside us, logs carpeted in moss play host to uncounted lives of plants and animals. Trees reach their branches down into the cleft cut by the river, searching for sunlight wherever they can in this steep gorge.  Small flies whirl restlessly across our vision.  Their blue wings and olive bodies seem an unnecessary and extravagant dash of color on something so small, so ephemeral.

Vermont is named for the greenness of its mountains, or les monts verts as the first French settlers called these ancient hills.  One of the rivers nearby is called the Lemon Fair, its name preserving the French sounds in misplaced English words.  A sweeping glance would call this place green, but it only takes a moment of slowing down to really look before you see all the rainbow represented here. 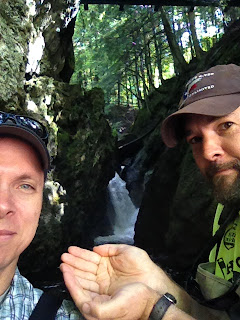 Much of the color is underwater, on the scales of the fine-featured trout that fin the current before us.  The native brook trout are dappled a vermiculated green above, fading to pale bellies below.  Their fins are slashed with bright red and white.  The rainbow trout, imported from the west coast, iridesce when a beam of sunlight finds its way down through the leaves and the water.  The young brown trout - far from their native Europe - shine like salmon.  Under the rocks small tan sculpin harvest tiny invertebrate meals.

Gray stones slide slower than glaciers down the bank, moving imperceptibly and irresistibly toward the sea.  On the bank, seven tiny mushrooms stand up, no taller than my thumb, their caps bright orange like yearling efts.

It is a perfect day.  We are grateful to receive it, grateful to be here, to stand in these waters as their life flows around us.

As I think of standing in the river, I am reminded of this passage from Thoreau:

“Late in the afternoon we passed a man on the shore fishing with a long birch pole, its silvery bark left on, and a dog at his side, rowing so near as to agitate his cork with our oars, and drive away luck for a season; and when we had rowed a mile as straight as an arrow, with our faces turned toward him, and the bubbles in our wake still visible on the tranquil surface, there stood the fisher still with his dog, like statues under the other side of the heavens, the only objects to relieve the eye in the extended meadow; and there would he stand abiding his luck, till he took his way home through the fields at evening with his fish. Thus, by one bait or another, Nature allures inhabitants into all her recesses [….] His fishing was not a sport, nor solely a means of subsistence, but a sort of solemn sacrament and withdrawal from the world, just as the aged read their Bibles."  H.D. Thoreau, A Week On The Concord And Merrimack Rivers, (New York: Signet, 1961; emphasis mine) p. 31-32.

“[F]ishers can be natural historians and waterside contemplatives par excellence."

By “fishers” she means those who fish, fishermen and fisherwomen and fisherchildren. This comes at the conclusion of a story in which she almost reprimanded a small boy who was catching fish for bait, but then decided not to do so. She was afraid he was catching too many, or juvenile fish that would not grow to maturity.  Later, she considered the fact that if he was fishing, he could well be learning about fish in a way no one else does.  She reports that she was glad she didn't reprimand him.

It's true that in hunting and fishing some people learn practices of cruelty towards animals, or learn to regard animals instrumentally; but my experience is that most of the people I know who hunt and fish know a lot more about nature than the average person who does not.  Harvesting wild food often makes people naturalists, and can indeed make us much more "mindful carnivores" as Tovar Cerulli puts it.  Anecdotally, I find that hunting and fishing have made me less of a carnivore, and increasingly concerned with animal flourishing.  (The quote from Stephanie Mills is found in Epicurean Simplicity, published in Washington, Covelo, and London: Island Press/Shearwater Books, 2002 p.125.)

Note: I think Matt intended his gesture of catching water in fun, but I like the way it looks like a gesture of gratefully receiving the waterfall.