Learn Spanish in Guatemala, Help Save the Rainforest

I think the best way to learn a language is to immerse yourself in it.  Read books in the language you want to learn, eat the food of its cultures, and, if at all possible, travel to where it is spoken.

If you're thinking about doing this with Spanish, let me recommend a place to do this in Guatemala: the Asociación Bio-Itzá in San José, Petén, Guatemala, on the Northwest shore of Lake Petén-Itzá. 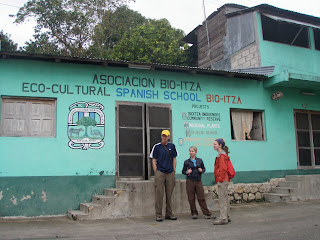 This is a small, non-profit group run by a few devoted individuals who are trying to preserve their language, their forests, their modes of agriculture, and their communities.  They teach Spanish by full immersion, providing four hours a day of individual instruction tailored to your needs, homestays with delightful local families, and the opportunity to experience both contemporary Guatemalan and traditional Mayan cultures.

So why am I writing about this?  Because their Spanish school is their means of raising money to support a number of other important endeavors including:
If you're interested, send an email to them at escuelabioitza at hotmail dot com.  Or check out their new website.
Posted by David O'Hara at 8:03 AM 2 comments: